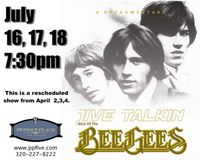 Jive Talkin': The Music of The Bee Gees

Consisting of brothers Barry, Robin, and Maurice Gibb, The Bee Gees had two distinct periods of exceptional success; as a popular music act in the late 1960s and early 1970s, and as prominent performers of the disco music era in the mid-to-late 1970s. The Bee Gees have sold more than 220 million records worldwide, making them one of the world's best-selling music artists of all time. They were inducted into the Rock and Roll Hall of Fame in 1997. The Bee Gees' Hall of Fame citation says "Only Elvis Presley, the Beatles, Michael Jackson, Garth Brooks, and Paul McCartney have outsold the Bee Gees.".

Featuring Classics: Stayin' Alive, Massachusetts, Night Fever, To Love Somebody, You Should Be Dancin', I Started A Joke, How Deep Is Your Love and MANY, MANY MORE!